The Bourne–Morton Canal is an archaeological feature to the north east of Bourne in Lincolnshire, England. In old maps and documents it is known as the Old Ea. It was a 6.5 km artificial waterway linking the dry ground at Bourne to the ancient edge of the sea near Pinchbeck, or perhaps to a navigable estuary in the area. There is now no visible trace.

Excavation at Cross Drove in the 1990s suggests it was around 2.6 m deep at high tide, 6 m wide at the base and 10 to 12 m wide at the surface. It appears to date back to Roman times although very little is known.1

After that, ‘the site of the nation’s first ‘Cut’ is a subject that gets rival tourist boards hot under the collar, and there are at least two main contenders. The Bridgewater Canal, so instrumental in the growth of Manchester as an industrial powerhouse, is thought to be the first, opened in 1761. Northern Ireland’s Newry Canal is older, however, opened in 1742.

In terms of waters adapted or cut as navigation channels, Exeter Ship Canal dates back much further, to the 1560s, while strictly speaking the Romans also created channels such as Foss Dyke for similar purposes.’2

The first canal built in Ireland was a cutting (named The Friars Cut) to connect upper and lower Lough Corrib in the 12th century. Some other attempts were made but failed.3

There is, however, another ‘cut’ that seems to have been forgotten about.

Scheduled for inclusion in the next revision of the RMP: Yes

Turlough O’Conor moved a fleet from the River Suck to Lough Ree in 1139 by digging a canal, enabling him to surprise his Viking enemies by attacking from an unexpected direction. This could only be done by connecting the River Suck with the headwaters of the Hind River through turloughs at Ballinturly and Correal.

According to the National Monuments Service of Ireland, Turlough built a canal between the River Suck and Lough Ree, by linking several turloughs and the River Hind. If true, this could make it the earliest canal or river engineering in Ireland.

That Turlough was involved in some sort of river engineering seems solid enough, but exactly what kind is still in doubt.

‘Toirdelbhach spent much of his career modernising and improving various aspects of Ireland, particularly in his home province of Connacht. Tairrdelbach constructed Dún Gaillimhe in 1124, for use as a fort and naval base, from which the King’s fleets could attack all along the west coast of Ireland. A small settlement grew up around this fort and eventually this developed into Galway city. Although the town was destroyed or burned many times over the next few centuries it continued to grow into a prosperous city.

He also created a new supply of water for settlements in eastern Connacht when he constructed a six-mile long canal which redirected the River Suck around a castle and towards nearby towns and villages. The route of this damn (sic) probably began near the modern town of Ballinasloe which was built on the river later.’5

‘During 1139, he worked hard to revitalize his forces, employing them to improve Connacht’s natural defenses by diverting the Suck to form a flood plain.’6

It is difficult to ascertain the extent of the work done on the River Hind, due to extensive works done in the 1800s in a bid to make the river navigable, in much the same way and for the same reasons that Turlough may have done 700 years earlier. However, the reason cited ‘…moved a fleet from the River Suck to Lough Ree in 1139 by digging a canal, enabling him to surprise his Viking enemies by attacking from an unexpected direction..’ , I think is slightly spurious. Any Viking fleet would have gone home and probably died of old age before Turloughs fleet could have ‘surprised’ them.

There are several stretches where the canal deviated from the original river course that still remain.

The faint line running parallel above the hedge line through the red dot indicates the course of the start of the canal as it leaves the River Suck on its way to Ballinturly Turlough.

Cloonconra, now filled in and only recognisable as different colour ground on modern photos.

I called this article ‘Turlough O’Conor, instigator of canal and castle,’ partly as a pun on his name. Toirdelbach is a masculine Irish given name. Forms of the name include Toirdhealbhach, Tárlach, and Traolach. An Anglicised form is Turlough. The names are ultimately derived from the Irish toirdhealbh meaning “prompting”, and originated as a byname meaning “instigator”. This may have been coincidence, but he was an innovator. In 1129, he built a castle at Athlone. “Athlone is one of the few places in Ireland where we are told a castle (caislen or caistel) is erected in pre-Norman times. “The castle of Athlone and the bridge were erected by Turlough O’Conor in the summer of this year…(Annals of the Four Masters, anno 1129 ”’.7

He was also responsible for the creation of an important piece of religious art. “The Cross of Cong (Irish: Cros Chonga, “the yellow baculum”) is an early 12th-century Irish Christian ornamented cusped processional cross, which was, as an inscription says, made for Tairrdelbach Ua Conchobair (d. 1156), King of Connacht and High King of Ireland to donate to the Cathedral church of the period that was located at Tuam, County Galway, Ireland. The cross was subsequently moved to Cong Abbey at Cong, County Mayo, from which it takes its name. It was designed to be placed on top of a staff and is also a reliquary, designed to hold a piece of the purported True Cross. This gave it additional importance as an object of reverence and was undoubtedly the reason for the object’s elaborate beauty. 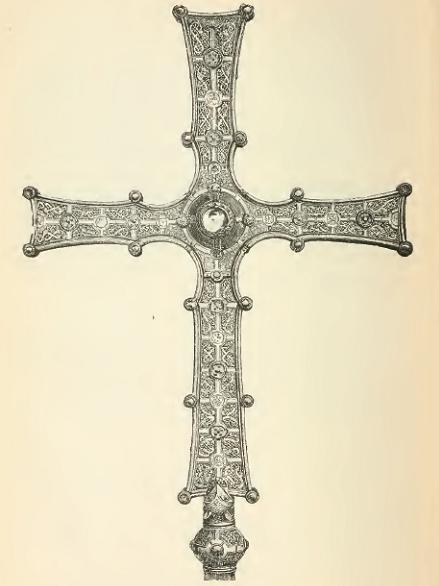 The cross is displayed at the National Museum of Ireland, Dublin, having previously been in the Museum of the Royal Irish Academy, Dublin. It is considered one of finest examples of metalwork and decorative art of its period in Western Europe.”8

One final piece of interest about his name comes from the almost uniquely Irish phenomenon of the turlough. A turlough, or turlach, is a type of disappearing lake (most turloughs flood in the autumn, usually sometime in October, and then dry up some time between April and July) found mostly in limestone areas of Ireland, west of the River Shannon. The name comes from the Irish tur, meaning “dry”, with the suffix -lach, meaning “a place” (in an abstract sense). The -lach suffix is often mistakenly spelled and/or thought to refer to the word loch, the Irish, Scottish Gaelic and Scots word for “lake”. The fact that he joined two turloughs to create his canal just makes him more fascinating.

One thought on “Turlough O’Conor, instigator of canals and castles.”